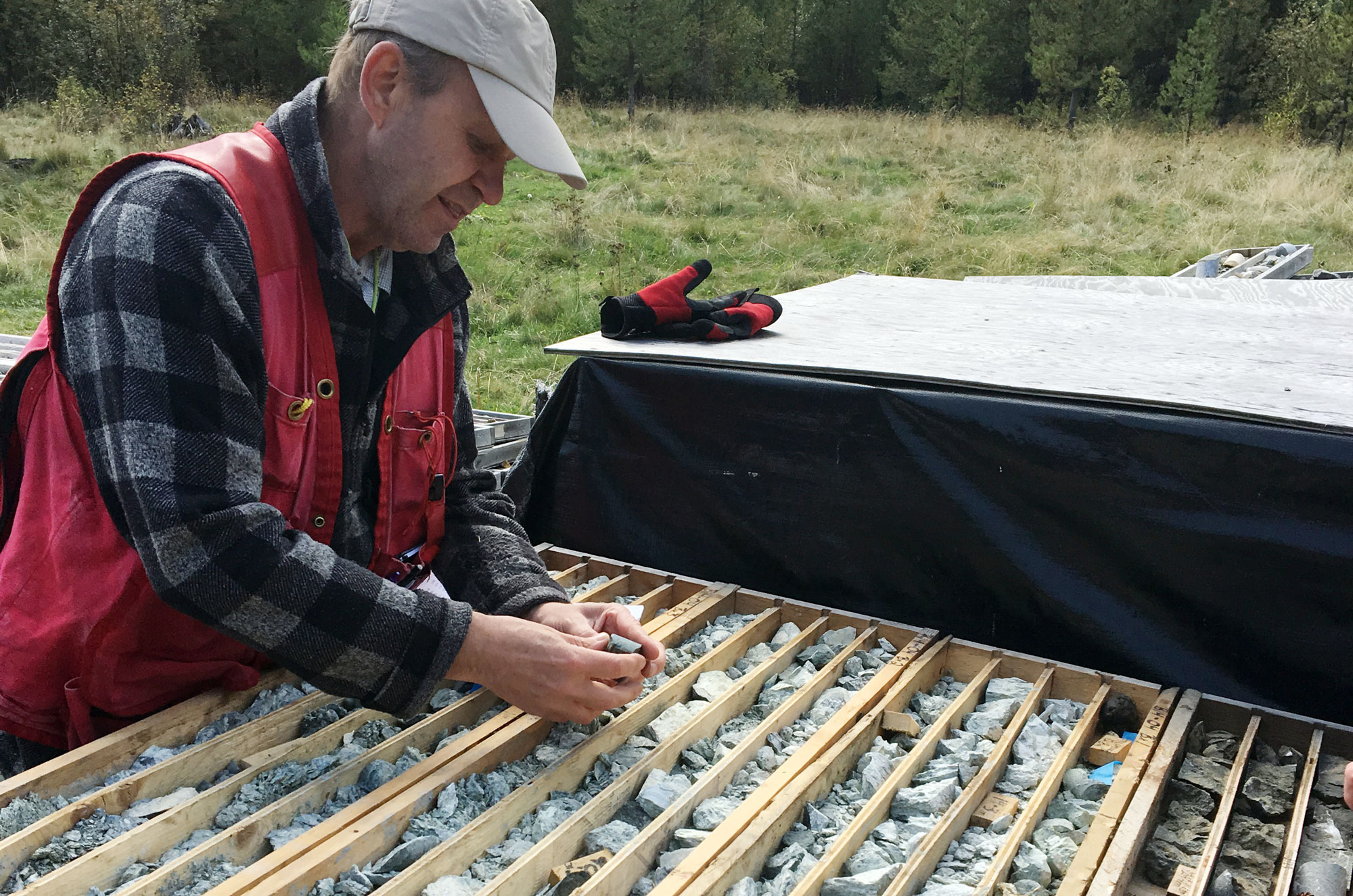 The Beaver property is situated in south-central BC, 15 kilometres east of the Gibraltar mine, the second largest open-pit copper mine in Canada. The property has excellent infrastructure including paved and forestry service roads allowing easy access to all parts of the property.

Inomin's inaugural drilling program hit significant mineralization in all drill holes including 252.1 metres grading 20.6% magnesium, 0.16% nickel, and 0.33% chromium. All holes ended in mineralization leaving the discoveries open to expansion in all directions.

Magnesium-nickel-chromium-cobalt bearing-ultramafic rocks has been delineated by property-wide magnetic surveys. The surveys indicate ultramafic occurrences over an extensive 4 km by 8 km area of the property. Exploration surveys and drilling of 30 holes indicate good potential for large, bulk-tonnage, near-surface deposits.

A pre-scoping metallurgical study demonstrated 90% of the nickel is from nickel sulphide minerals heazlewoodite and pentlandite, the remaining in serpentine minerals. Nickel recovery tests achieved positive recoveries and a marketable nickel concentrate.

Historic exploration by a previous operator in the Beaver property area initially targeted gold. Although gold was found in select areas, nickel sulphide and cobalt were discovered in uniform amounts over all areas drill tested. The ultramafic rock hosting the nickel, delineated by magnetic surveys and drilling, covers a large 4 km by 8 km footprint indicating the property’s potential for large, bulk tonnage, near-surface nickel.

Given the discovery of significant nickel, a pre-scoping metallurgical study was completed by SGS Canada Inc. in 2015. Metallurgical tests demonstrated positive nickel recovery rates in line with nickel deposits of a similar nature. As nickel prices were relatively low at the time (around US$4.00/lb) and a new gold discovery was made by the past ownership group elsewhere in the region, no further work was done at the property.

Inomin acquired the Beaver property by staking in 2019. The company also acquired the 12,662 hectare Lynx nickel property, located just 11 kilometres south of Beaver, given the similar geological environment and extensive nickel occurrences found in outcroppings. As the Beaver and Lynx properties are near the Gibraltar and Mount Polley porphyry deposits – representative of major hydrothermal activity – the district is geological conducive for hosting substantial mineral deposits.

The Beaver property is ideally located in south-central British Columbia, 50 kilometres north from the town of Williams Lake and just 15 kilometres east of the Gibraltar mine, the second largest open-pit copper mine in Canada. The property is easily accessible by paved roads with hydro-electric power nearby. 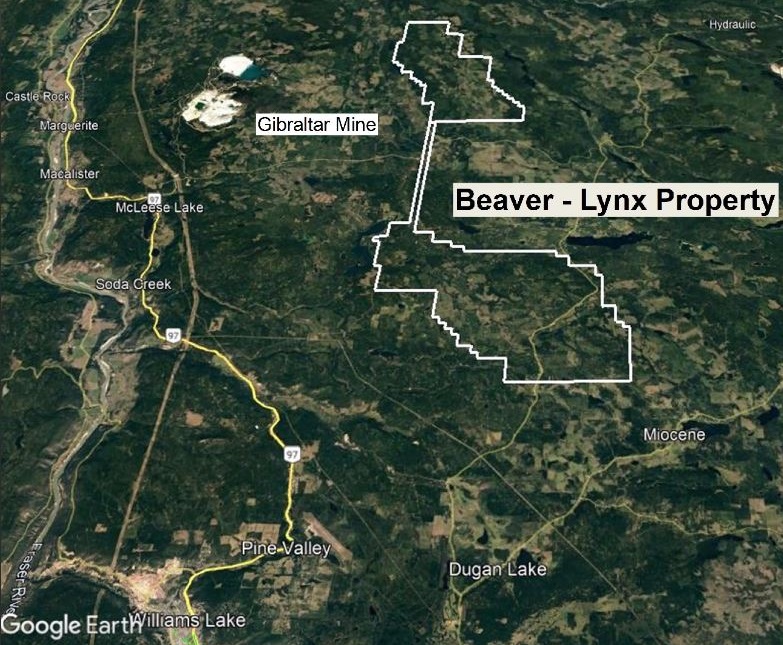 Inomin's inaugural 2021 drilling program at Beaver generated an exciting major discovery of magnesium-nickel-chromium, and other critical minerals. Drill-hole B21-02 intersected 252.1 metres (m) grading 20.6% magnesium, 0.16% nickel, and 0.33% chromium. B21-02 is the longest mineralized hole ever drilled at Beaver, and the first-ever drilling in the Spur zone, one of five large mineralized areas at the property.

Hole B21-01 at Spur also made another first, discovering near-surface silver and copper, intersecting 649 g/t silver and 0.29% copper over 3 metres, before the hole was terminated due to difficult ground drilling conditions. 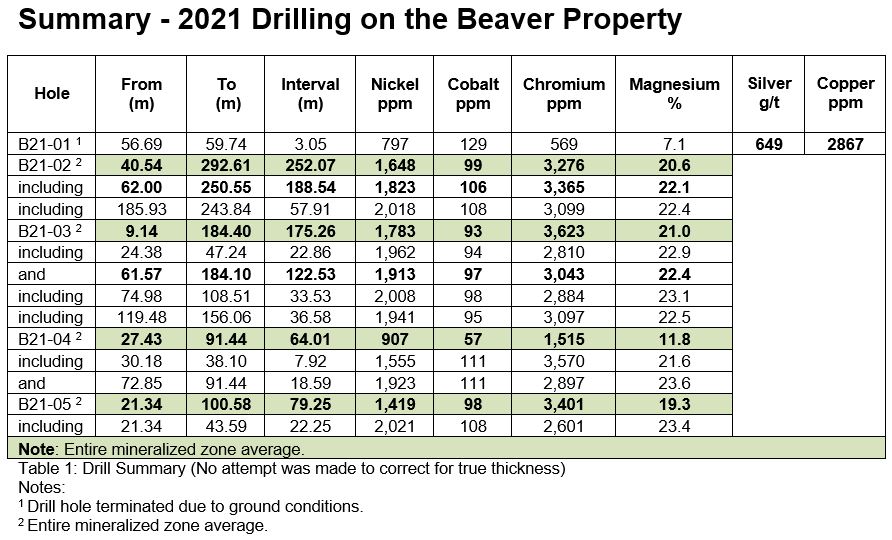 The 2021 drilling program, consisting of 5 holes (716 metres), successfully tested mineralization over a strike length of 5.7 kilometres. All holes ended in mineralization leaving the discoveries open to extension at depth.

Ultramafic rocks like those that host magnesium and nickel-rich mineralization at Beaver can be among the largest carbon capture and storage reservoirs on Earth.

Initial testing by researchers at the University of British Columbia (UBC), demonstrate that samples from the Company’s Beaver discovery contain key minerals that sequester carbon dioxide (CO2) from the atmosphere.

Brucite, a mineral form of magnesium, is an important mineral for carbon capture as it naturally sequesters CO2. In tailings it reacts with CO2 removing it from the atmosphere, converting it into a safe, solid form that is stable for thousands of years.

A substantial reduction in greenhouse gas emissions could enable mines to become carbon neutral and lower operating costs. Even greater emission reductions could create carbon negative mines and the opportunity to generate carbon credits, the “holy grail” for mining operations and green investment.

The Beaver and Lynx properties are situated in the Cache Creek Terrane bounded to the east and west by upper Triassic-aged rocks of the Quesnel (Quesnellia) Terrane.  The Cache Creek Terrane, extending from lower British Columbia to southern Yukon, consists of Permian to Triassic-aged volcanic rocks, carbonate rocks, coarse clastic rocks and small amounts of ultramafic rock, chert and argillite.

The fabric of the underlying sediments and volcanics trend north-northwest as evidenced by the consistent drainage alignments. At least five prominent, north-northwest trending drainage lineaments cross the property. All of these are interpreted as marking bedrock fracture zones. This gives rise to the possibility that they represent horsetail splays of strike-slip faults at the end of a major strike-slip fault, possibly the Pinchi Fault which is considered to end at latitudes in the vicinity of the property (Gabrielse and Yorath, 1992). As such, the Beaver property is a prime site for hydrothermal activity.

Nickel mineralization at Beaver is associated with shallow dipping ultramafic rocks. Preliminary metallurgical tests conducted by SGS Canada Inc. demonstrated that 90% of the nickel is in the form of nickel sulphide minerals heazlewoodite and pentlandite, with the remaining found in serpentine minerals.

Initial testing also revealed positive nickel recoveries, in line with nickel deposits of a similar nature, through conventional floatation methods. Nickel deportment indicates 91% of the nickel is in a recoverable form with the 9% balance retained in solid solution with serpentine. Furthermore, as the host rock breaks down quite readily, nickel may be amenable to alternative low-cost recovery methods such as heap leaching. 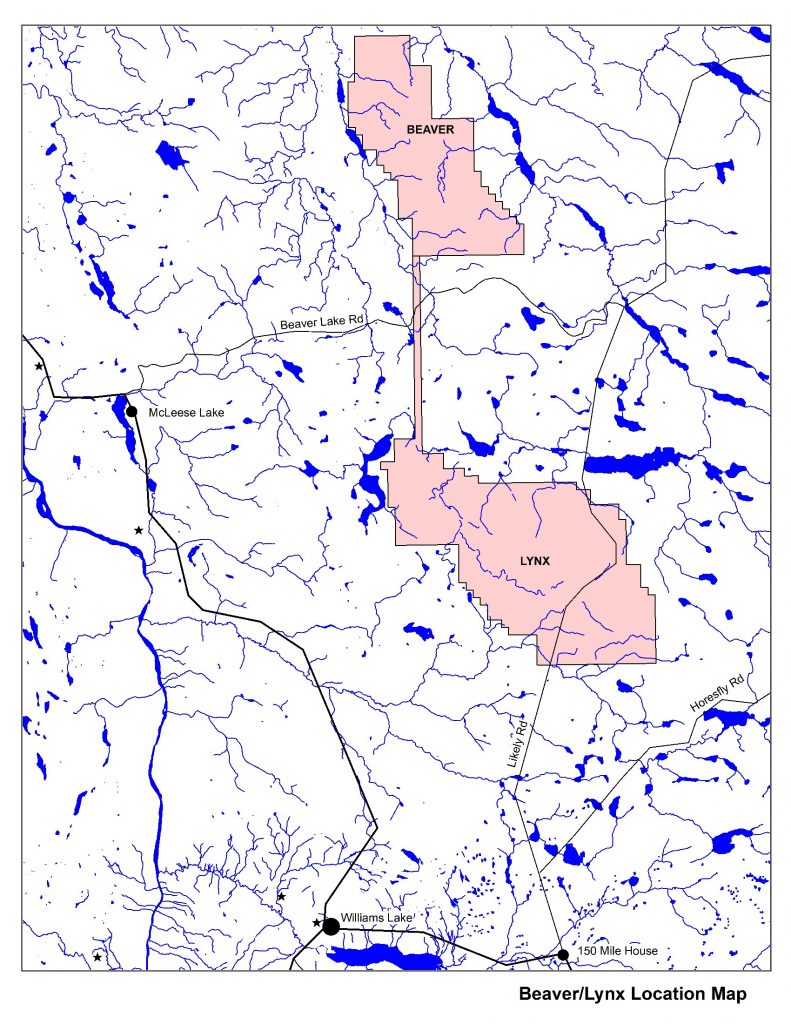 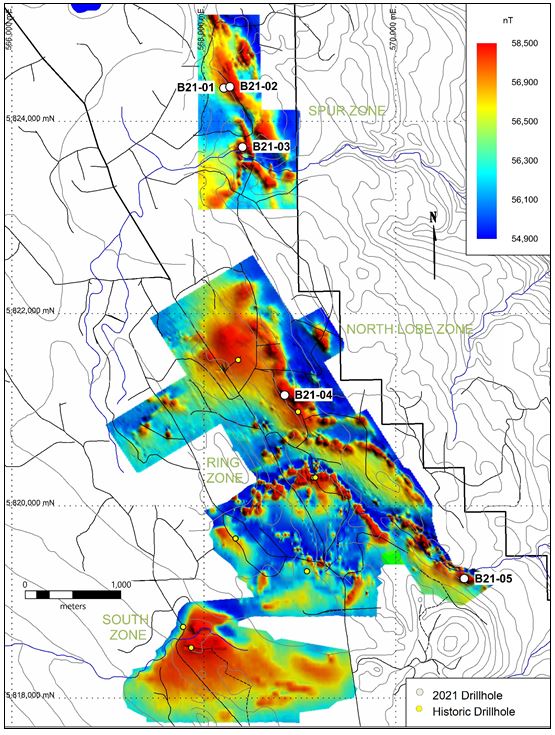 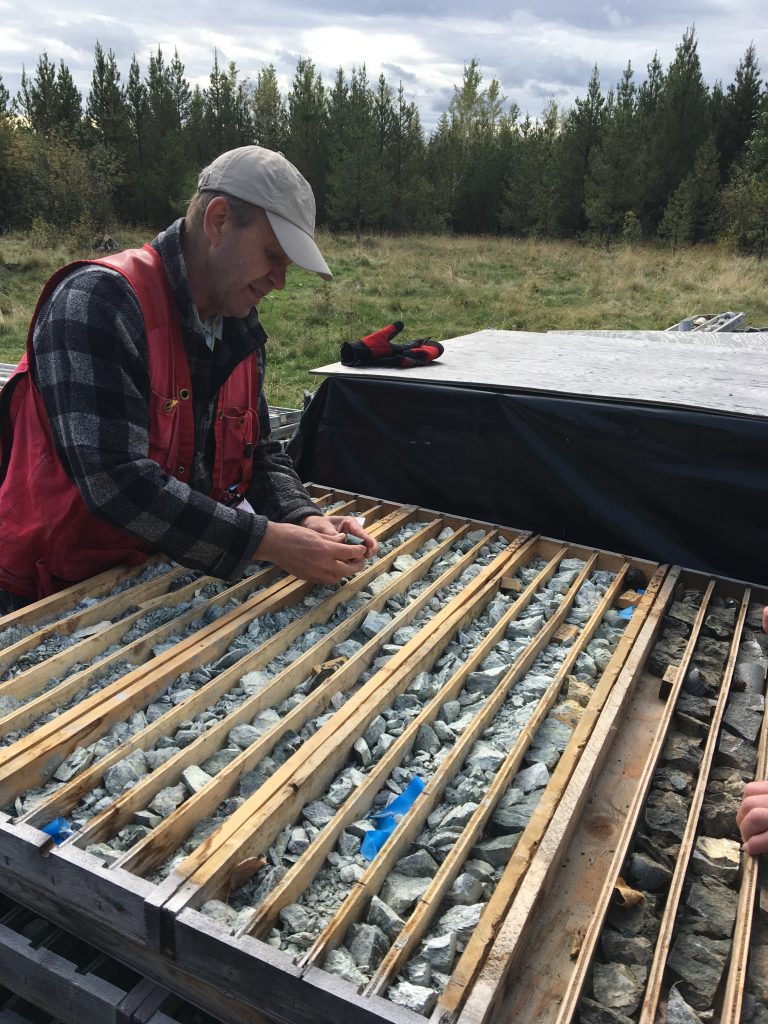 Reviewing core from drilling at Beaver. 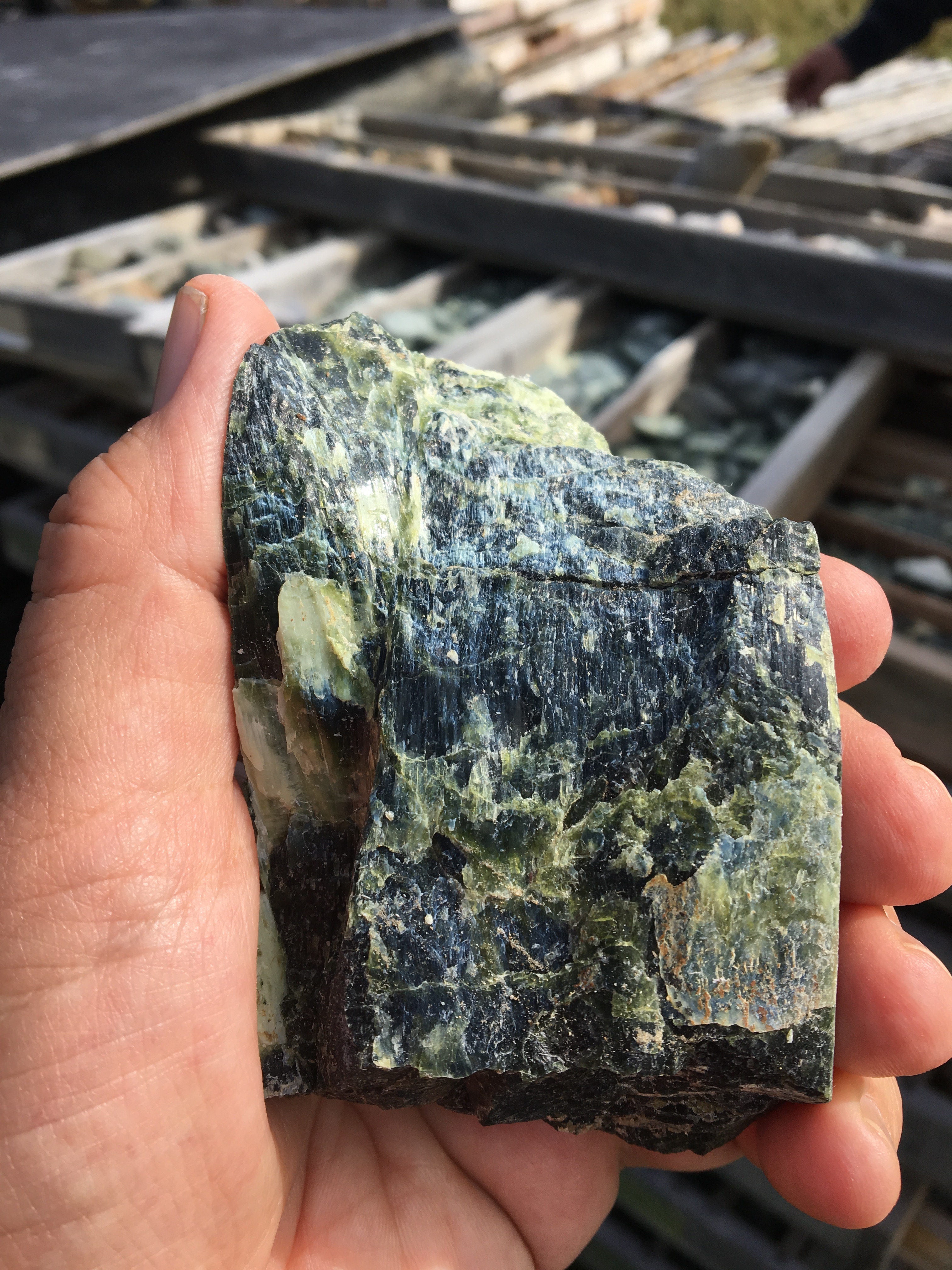 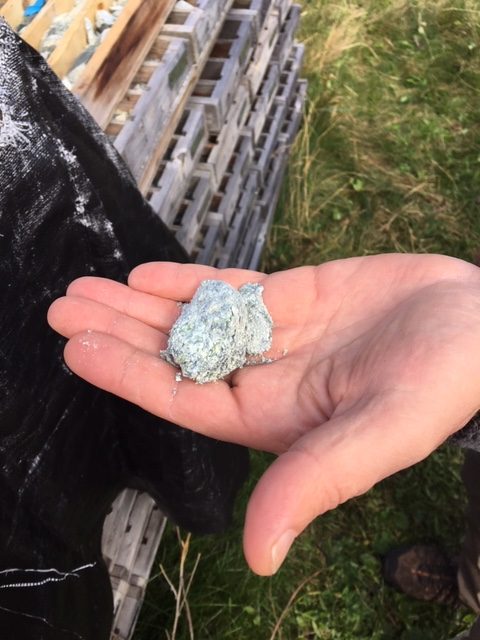 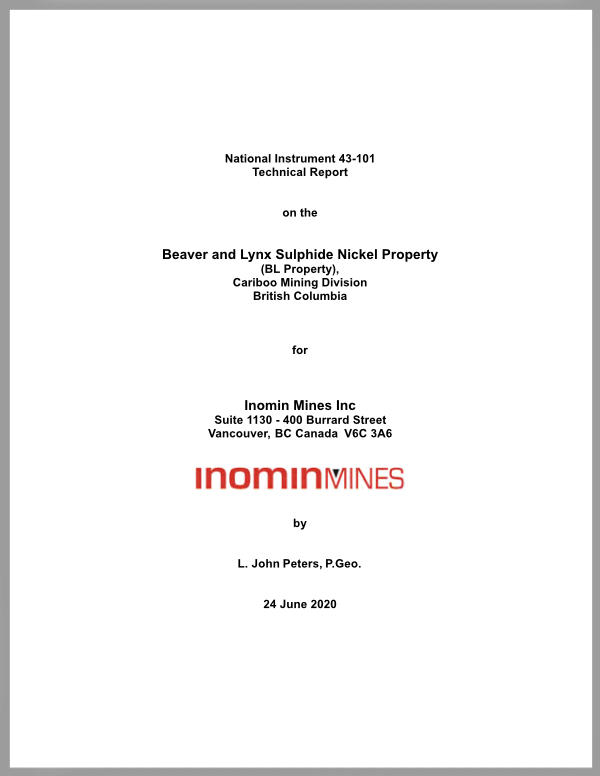