Vancouver, British Columbia, August 4, 2020 – Inomin Mines Inc. (TSX.V: MINE) is pleased to announce the execution of an agreement to acquire the La Gitana and Pena Blanca gold-silver projects in Mexico. The properties are located approximately 100 kilometers east of Oaxaca City in the prolific Oaxaca Gold-Silver Belt that hosts several epithermal gold-silver mines and prospects 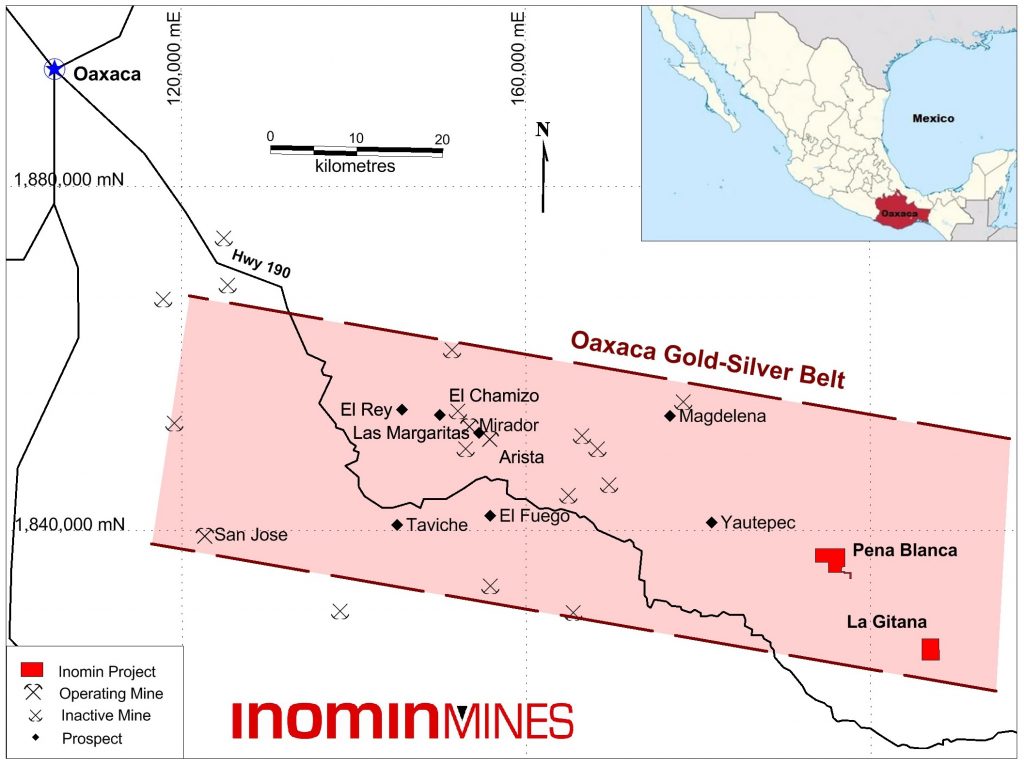 Disclosure Note: All technical results on the La Gitana and Pena Blanca properties reported herein is information completed and disclosed publically by Chesapeake Gold Corp. and/or Gunpoint Exploration Ltd. The reliability of historical results is uncertain but considered to be relevant by Company management, however, there is a risk that any future confirmation work and exploration may produce results that substantially differ from the historical results.

In total, 40 drill holes – 8,462 metres of diamond drilling – have been completed at La Gitana. Most of the drilling has been in the Cerro Di Oro gold-silver zone that is open along strike and at depth. Mineralization also appears open laterally: to the East surface veins have not been drilled; to the West is an untested overburden covered area (see Figure 2).

Note all grade intersections reported in above table are core interval lengths and not true thicknesses. All drill core was HQ and NQ sized. Core sampling was completed on half core segments over 1.5 to 3.0 metre (m) intervals.  All drill core samples were sent for preparation to ALS Chemex laboratory in Guadalajara, Mexico; prepared samples sent to ALS Chemex laboratory in Vancouver, Canada for analyses for gold by fire assay and for multi-element by 4-acid digestion ICP. 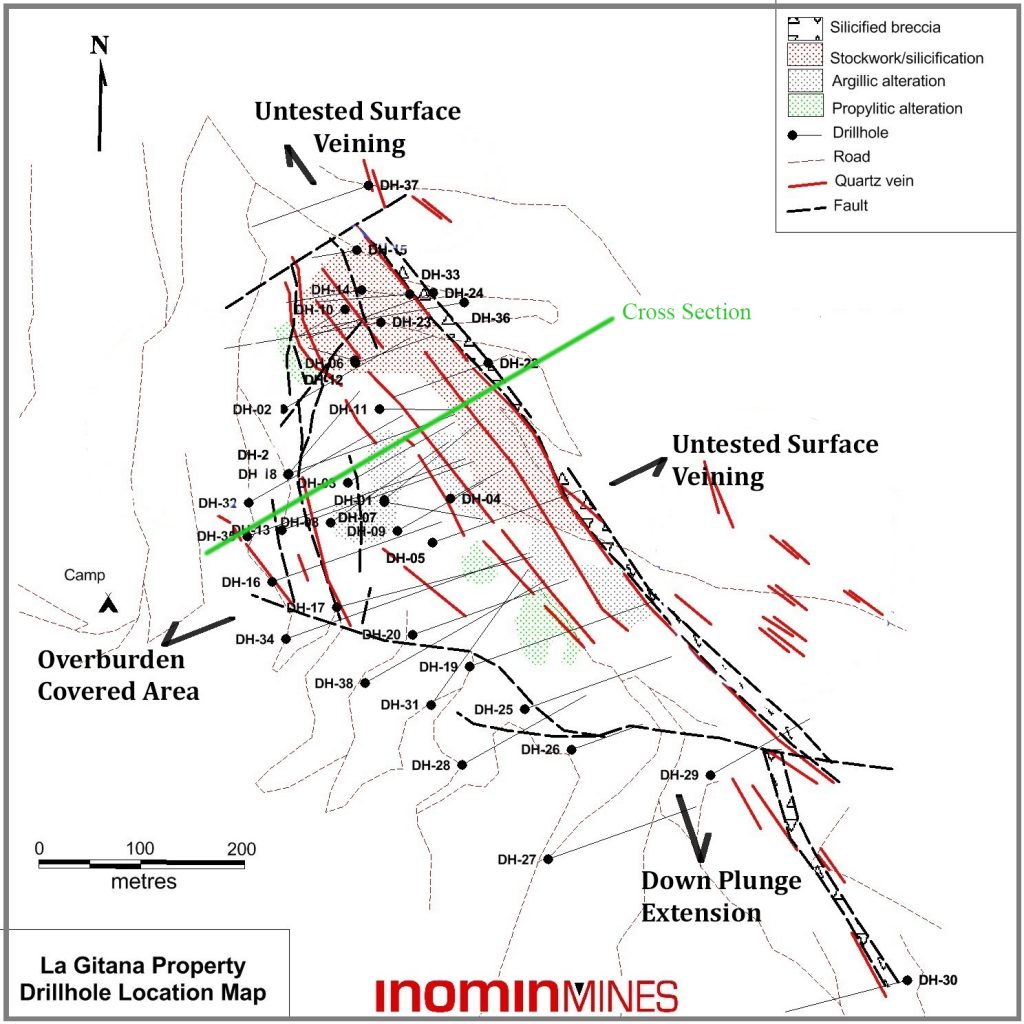 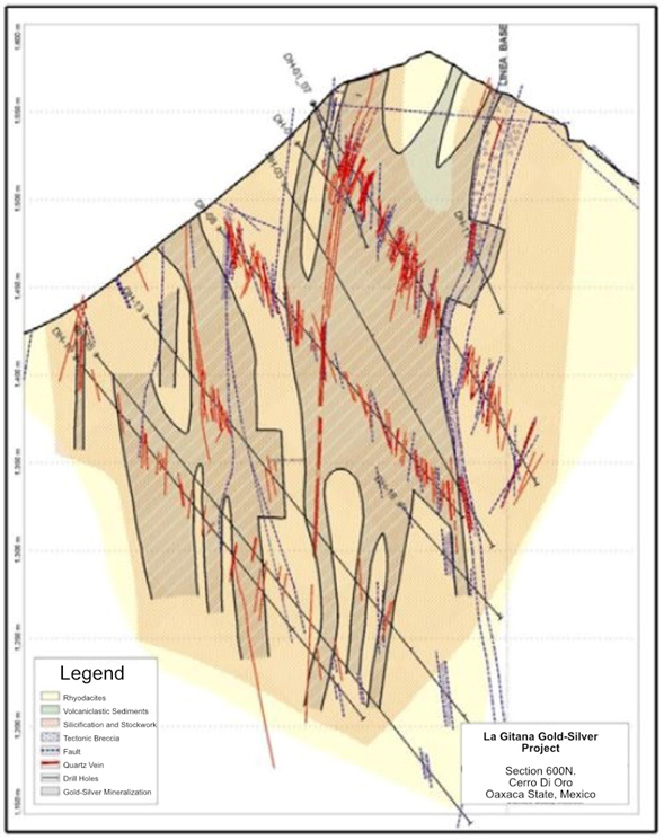 Pena Blanca, located 15 kilometers northwest of the La Gitana gold-silver project, is a large tonnage, epithermal gold-silver prospect that was discovered in 2005 by Chesapeake during a regional-scale stream sediment sampling program. As reported by Chesapeake, sediment anomalies ranging between 276 ppb to 2,200 ppb gold have been discovered from a 2.5 kilometre by 3.5 kilometre area surrounding the Pena Blanca ridge (Figure 4).

Geochemical assay results obtained by Chesapeake from a 300 metre by 1,000 metre soil sample grid at Pena Blanca show a broad, N-NW trending gold anomaly with values above 0.2 g/t gold extending across the entire length of the grid. A stronger anomaly, greater than 0.5 g/t gold, is also observed across a core area of 200 metres by 400 metres to the northwest of the grid. The soil geochemistry data indicates that the mineralization has a strong northwest component and extends for more than 1 kilometer along strike.

Chesapeake collected channel rock samples from outcrops and hand-dug trenches excavated in a 200 metre by 300 metre area located at the northwest end of the soil sample grid (see Figure 4 & 5). This portion of Pena Blanca, an area affected by more intense silica-argillic alteration, also coincides with the soil grid’s 1.0 g/t plus gold anomaly. The sample cuts were taken across several different zones 50 metres to 100 metres apart.

High grade structures and widespread low grade disseminated mineralization were encountered throughout the 200 meter by 300 meter core area with many of the section cuts ending in mineralization. One outcrop zone, located more to the southwest, returned an intersection of 23.5 meters of 2.26 g/t gold and 178 g/t silver from a partially exposed northeast trending quartz stockwork system, and a cut of 23 meters of a 0.61 g/t gold from a set of northwest trending fractures, 50 meters further to the south. Other significant intersections included 46 meters of 0.61 g/t gold 200 meters to the southeast, and 25 meters of 0.47 g/t gold 150 meters more to the northeast (see Figure 5).

The trenching and outcrop channel sampling results reported by Chesapeake are as follows:

The Pena Blanca prospect covers 9 square kilometers of hydrothermal alteration of which less than 1 square kilometer has been systematically mapped and sampled. Another zone, located about 1 kilometer east-northeast of the Pena Blanca zone, returned rock ship assay results of up to 4.8 g/t gold. The mineralization is associated with a swarm of northwest trending, sub-parallel quartz veins, 1 meter to 5 meters in width, partially exposed for more than 500 meters along strike. Numerous other mineralized zones marked by stream sediment, soil and rock chip anomalies have been found at Pena Blanca. The style of the alteration and mineralization, together with the orientation and size of structures suggest that there are a widespread number of epithermal gold-silver mineralized systems that remain untested that will require systematic follow-up exploration by Inomin. 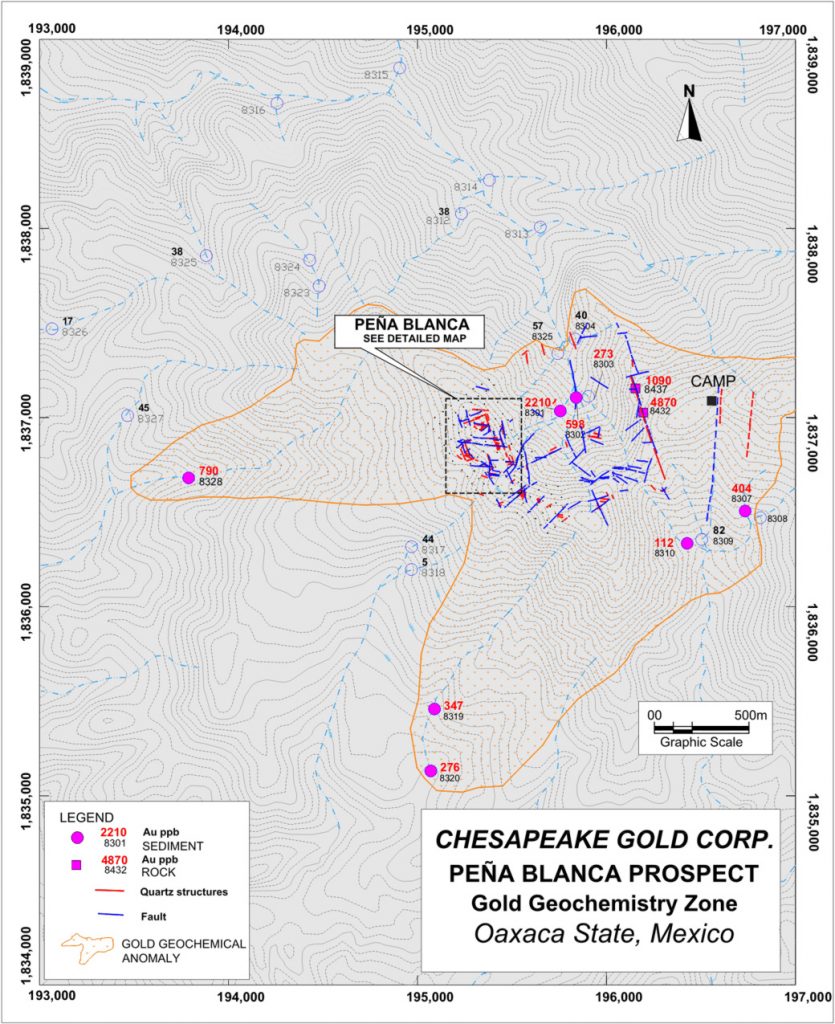 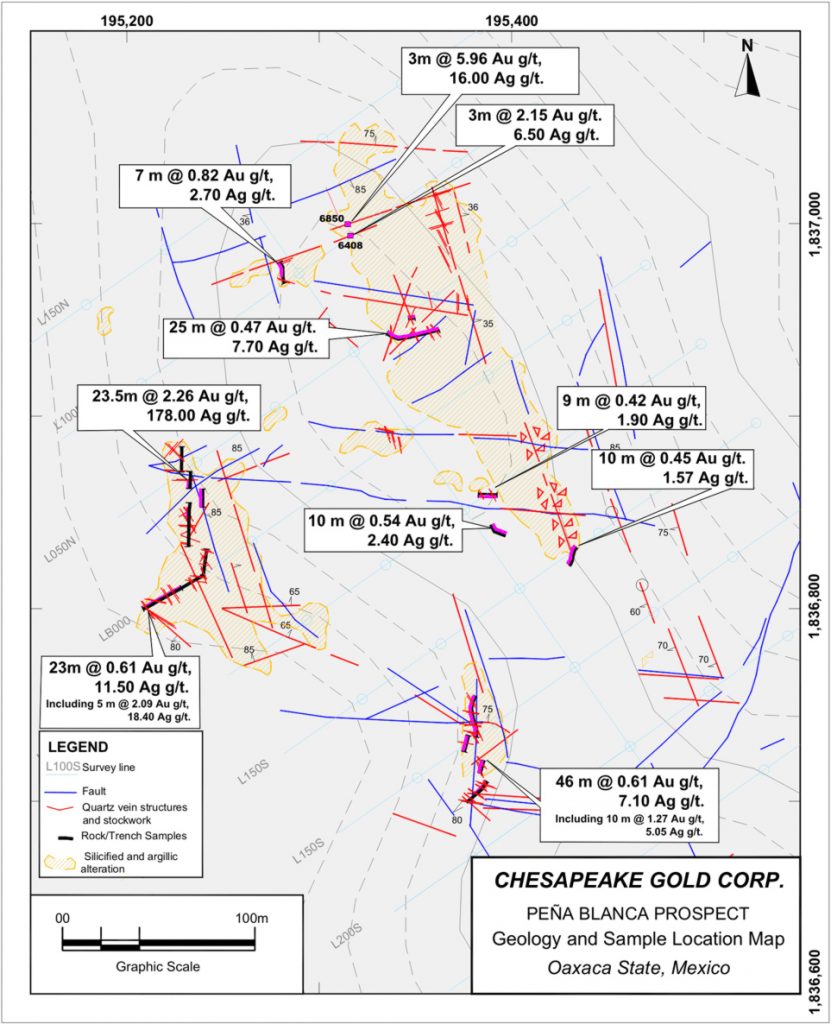 Subject to acceptance by the TSX Venture Exchange (the “Exchange”), Inomin is acquiring a 100% interest in the     La Gitana and Pena Blanca properties for 1,000,000 common shares of Inomin, $25,000 cash, and the grant of a 1.5% NSR payable to Gunpoint on the Pena Blanca property (with an option for Inomin to purchase 0.5% of the NSR at any time for $1,000,000). La Gitana is subject to an existing 3% NSR to a third-party which will be assumed by Inomin.

Inomin also announces a non-brokered private placement of up to 5,333,333 shares priced at $0.075 per share, for gross proceeds of up to $400,000 (the “Private Placement”). The Private Placement is not subject to any minimum aggregate subscription, however a minimum raise of $210,000 is required as a condition precedent to completing the acquisition of Canada Metals Ltd., details of which were previously announced by Inomin in its May 4, 2020 news release.

Peak Asset Management Pty Ltd. (“Peak”), a Melbourne-based investment management firm, has been engaged as corporate advisor and lead manager to provide capital raising activities, financial advice, and marketing strategy to Inomin. In consideration for its services, Inomin has agreed to compensate Peak with the following (i) a management fee equal to 1% of the funds raised under the Private Placement; (ii) a capital raising fee of 7% of funds raised or introduced by Peak under the Private Placement; and (iii) 8% of any shares issued to subscribers introduced by Peak in warrants with an exercise price of $0.08 per share expiring December 31, 2022. Finders’ fees may also be paid to third party finders.

In addition for working capital, Inomin intends to use the proceeds of the Private Placement to establish operations in Mexico to move forward with the La Gitana and Pena Blanca projects, as well as assess other potential gold and silver acquisition opportunities. Inomin is also reviewing options to advance its Beaver-Lynx class 1 (sulphide) nickel project in south-central British Columbia. A N.I. 43-101 Technical Report on the Beaver and Lynx properties has recently been completed, as well as applications to the B.C. Ministry of Mines, Energy and Petroleum Resources for multi-year exploration work permits.

Inomin Mines is engaged in the identification, acquisition and exploration of mineral properties with a 100% interest in the Beaver-Lynx sulphide nickel project in south-central British Columbia, and the Fleetwood zinc-copper-gold-silver VMS project in south-west British Columbia. Inomin also owns 100% of the King’s Point gold-copper-zinc project in Newfoundland under option to Maritime Resources Corp. (TSX.V MAE). Inomin trades on the TSX Venture Exchange under the symbol MINE. For more information visit www.inominmines.com and follow us on Twitter @InominMines.

Inomin advisor Victor Jaramillo P.Geo, a qualified person as defined by NI 43-101, has reviewed and approved the technical information in this news release.