Vancouver, British Columbia, April 11, 2022 – Inomin Mines Inc. (TSX.V: MINE), (“Inomin”, “MINE” or the “Company”) is pleased to announce previously unreported significant magnesium (Mg) grades from historical 2014 drilling on the Beaver property. Highlights include BN14-23 which reported 100.6 meters (m) at an average grade of 21.5% Mg with 0.14% Ni (nickel). These holes were drilled in the Skelton and Ring zones – not drill tested by Inomin in the 2021 drilling campaign – as well as the North Lobe zone. The historic results, combined with the newly released 2021 drill results, demonstrate that high-grade magnesium mineralization is widespread at Beaver.  The 2014 drill core is on the property and additional sampling will be completed on these holes during the upcoming 2022 field season.

John Gomez, President of MINE states, “These unreported, high-grade, magnesium results from drilling by a previous operator, plus the Company’s 2021 drill results, confirms Beaver’s potential for hosting, in addition to large volumes of nickel, extensive high-grade magnesium. We are in the unique position of having high-grade magnesium and potentially a lot of it – a great combination.”

Magnesium and nickel prices have tripled and quadrupled respectively since the 2014 drilling programs at Beaver. Furthermore, Canada’s 2022 budget, released last week, has earmarked $3.8 billion to implement the country’s first critical minerals strategy, to ramp-up the extraction and processing of key minerals, including nickel, lithium, cobalt, and magnesium. 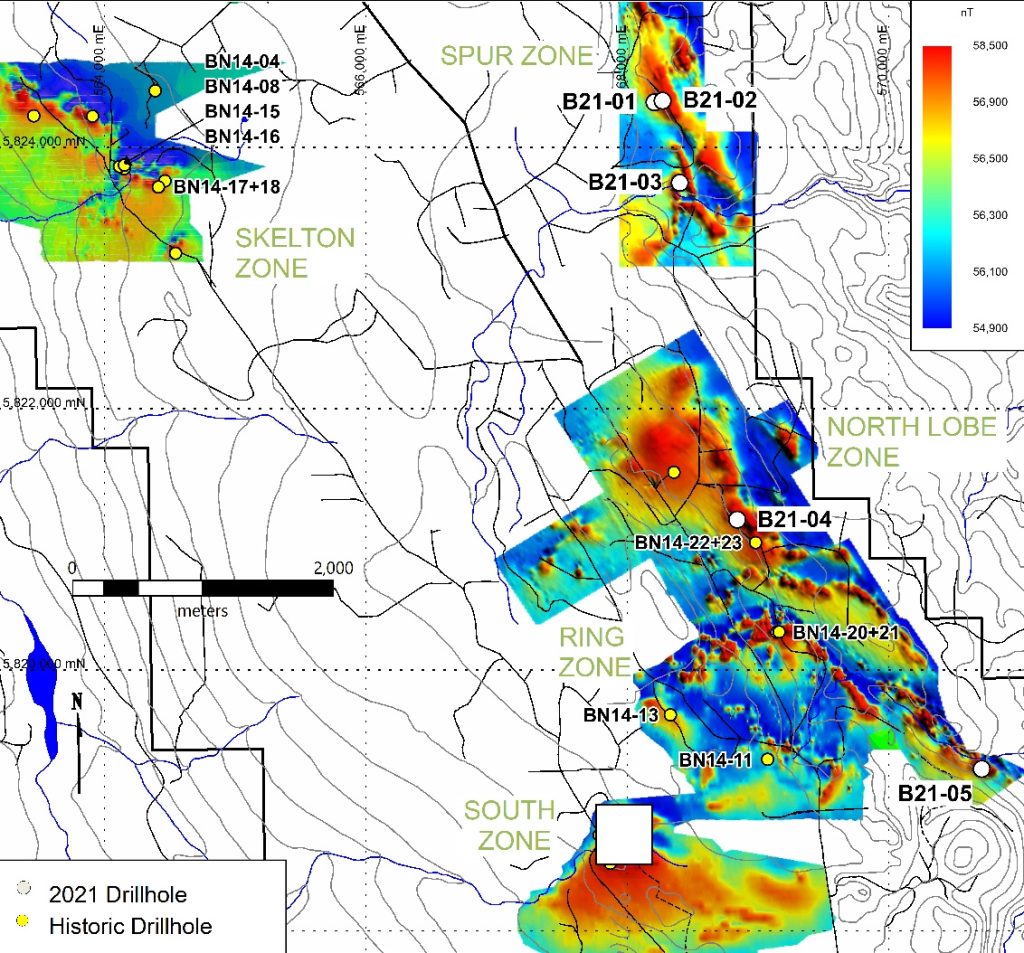 Although the 2014 drill program and results were not completed by Inomin, L. John Peters, P.Geo., a qualified person as defined by NI43-101, was the QP and supervisor for the 2014 drilling completed on Beaver by the previous operator.

Analytical processing of the core samples for the reported grades from 2014 drill core was completed by ALS Laboratory located at 2103 Dollarton Hwy, North Vancouver, BC.  Preparation methods (ALS code: SCR-41) involved drying and crushing the sample, then dry-sieving using a 180 micron (Tyler 80 mesh) screen. Analyses (ALS code: Ni-ICP05) was chosen for the selective decomposition of nickel sulphide to discriminate the nickel between the sulphides and the silicates. A solution mixture of 10% ammonium citrate and 35% hydrogen peroxide was used to leach the samples. Hydrogen peroxide, a strong oxidizing agent, oxidizes Ni sulphide to sulphate and releases Ni sulphide into the solution. Nickel in oxide and metallic forms are not leached if the leach time does not exceed a few hours at ambient temperature. Total digestion time was 2 hours. Final analysis was completed using Inductively Coupled Plasma – Atomic Emission Spectroscopy (ICP-AES).

About the Beaver-Lynx project

The Beaver-Lynx project is situated in relatively flat terrain and easily accessible via all-season roads, as well as a network of forestry roads providing access to most of the property. Other important nearby infrastructure includes electricity (hydro-power) and railroad. Skilled workers, contractors, and supplies are available locally from the city of Williams Lake situated about 20 kilometres south of Lynx.

For further information about the Beaver-Lynx project visit MINE’s website at www.inominmines.com

Inomin Mines is focused on the acquisition and exploration of mineral properties with strong potential to host significant resources, especially gold, silver, and critical minerals. Inomin holds the La Gitana and Pena Blanca gold-silver properties in Mexico. The Company owns a 100% interest in the Beaver-Lynx magnesium-nickel-cobalt project in south-central British Columbia, and the Fleetwood zinc-copper-gold-silver VMS project in south-west British Columbia. Inomin also holds a royalty on the King’s Point gold-copper-zinc project in Newfoundland owned by Maritime Resources Corp. (TSX.V MAE). Inomin trades on the TSX Venture Exchange under the symbol MINE. For more information visit www.inominmines.com and follow us on Twitter @InominMines.