Vancouver, British Columbia, March 29, 2022 – Inomin Mines Inc. (TSX.V: MINE), (“Inomin”, “MINE” or the “Company”) reports significant new discoveries of nickel, magnesium, and chromium at the Company’s Beaver nickel-cobalt property in south-central, British Columbia. Drill-hole B21-02 intersected 252.1 metres (m) grading 20.6% magnesium, 0.16% nickel, and 0.33% chromium. B21-02 is the longest mineralized hole ever drilled at Beaver, and the first-ever drilling in the Spur zone, one of five large mineralized areas at the property. Hole B21-01 at Spur also made another first, discovering near-surface silver and copper, intersecting 649 g/t silver and 0.29% copper over 3 metres, before the hole was terminated due to difficult ground drilling conditions. All holes ended in mineralization leaving the discoveries open to extension at depth.

Summary – 2021 Drilling on the Beaver Property 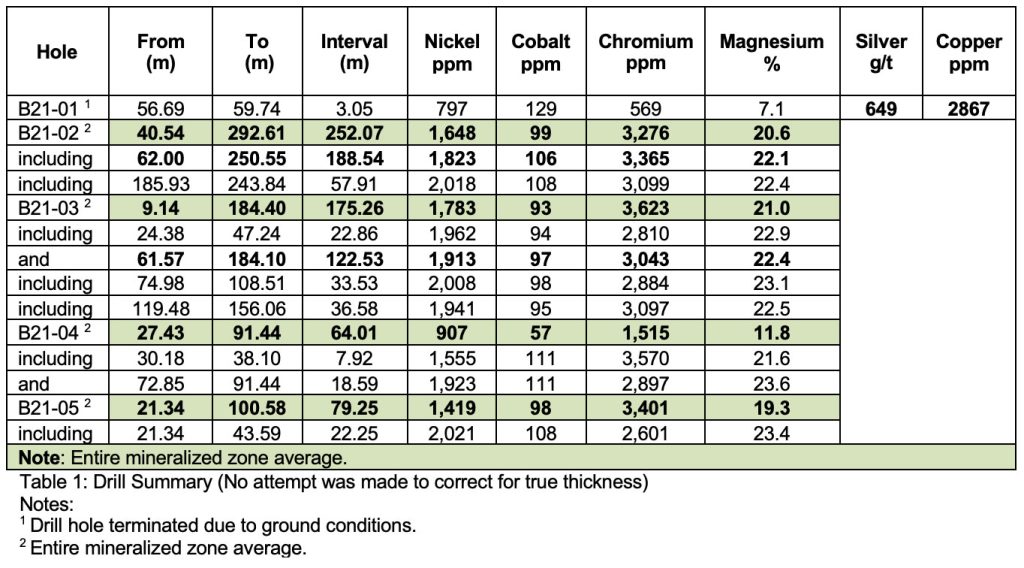 John Gomez, President of MINE states, “Our initial drilling program demonstrates Beaver’s potential for hosting large volumes of nickel, as well as magnesium and chromium – all critical metals. Finding significant magnesium and chromium in new areas of the property is a tremendous discovery that adds considerable more value to the project.”

A ground magnetics program on the Lynx block of the Beaver property, started in early February, has been concluded and results are pending. The magnetics program was implemented to delineate targets for the next phase of drilling in this previously untested area. 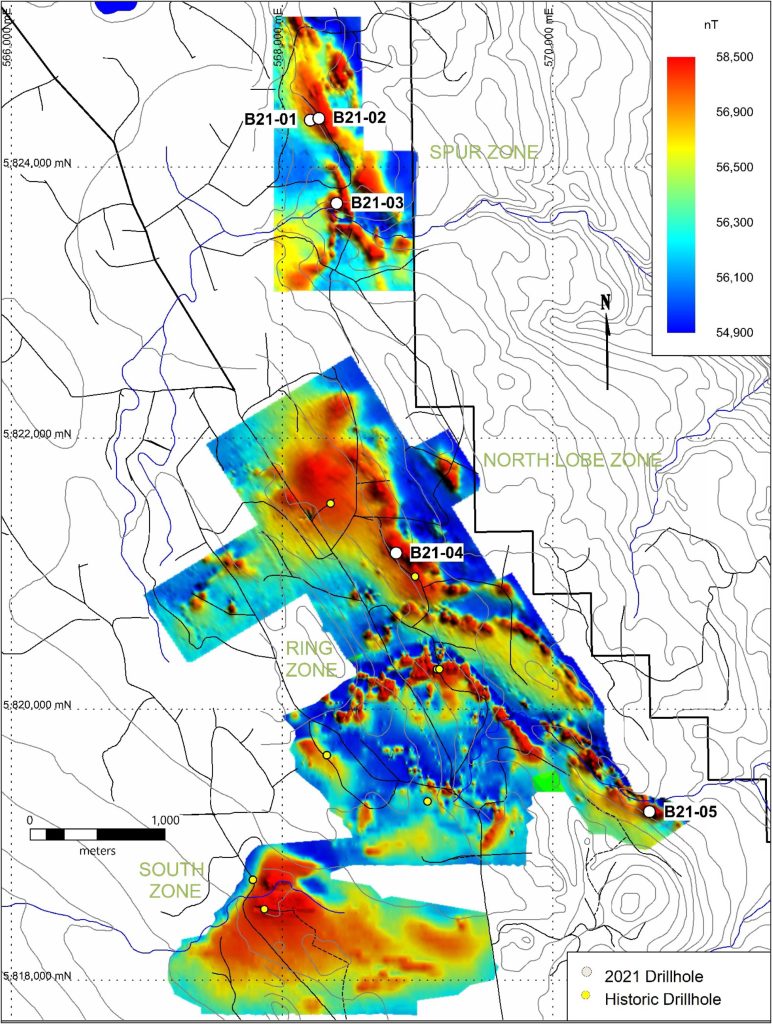 SGS Minerals Services of Burnaby, BC was chosen to analyze the core samples. Samples were dried, crushed, split, and pulverized prior to analyses. Multi-element analyses was completed using SGS’s GE-ICP90A50 method which is a 29 element package using a sodium peroxide digestion with an ICP-AES finish. This package was chosen specifically to discriminate sulphide nickel from silicate nickels generally found in olivines.

Collaboration with University of British Columbia

Select magnesium-rich samples from the drilling program will be analyzed at the University of British Columbia (UBC). Led by award-winning professor Dr. Greg Dipple, UBC researchers have demonstrated that magnesium captures carbon dioxide (CO2) from the air in tailings of ultramafic nickel, diamonds, and PGEs deposits.

Magnesium is a key mineral for carbon capture as it naturally sequesters CO2. In tailings magnesium reacts with CO2 removing it from the atmosphere, converting it into a safe, solid form that is stable for thousands of years.     Depending on the amount of carbon dioxide sequestered, it is technically possible for mines to be carbon neutral or even negative in terms of CO2 emissions.

Inomin is pleased to be working with UBC to support their leading carbon mineralization research and advancement of carbon capture technology. Carbonization technology could have a substantial impact to decrease carbon emissions and assist companies and governments reduce their CO2 footprints to fight climate change.

About the Beaver-Lynx project

The Beaver-Lynx project is situated in relatively flat terrain and easily accessible via all-season roads, as well as a network of forestry roads providing access to most of the property. Other important nearby infrastructure includes electricity (hydro-power) and railroad. Skilled workers, contractors, and supplies are available locally from the city of Williams Lake situated about 20 kilometres south of Lynx.

For further information about the Beaver-Lynx project visit MINE’s website at www.inominmines.com.

Inomin Mines is focused on the acquisition and exploration of mineral properties with strong potential to host significant resources, especially gold, silver and nickel projects. Inomin holds the La Gitana and Pena Blanca gold-silver properties in Mexico. The Company owns a 100% interest in the Beaver-Lynx sulphide nickel project in south-central British Columbia, and the Fleetwood zinc-copper-gold-silver VMS project in south-west British Columbia. Inomin also holds a royalty on the King’s Point gold-copper-zinc project in Newfoundland owned by Maritime Resources Corp. (TSX.V MAE). Inomin trades on the TSX Venture Exchange under the symbol MINE. For more information visit www.inominmines.com and follow us on Twitter @InominMines.